Nina Disappears! Zuellni in a State of Emergency

Nina Antalk disappears after acquiring the Fallen One of Gandoweria. She re-appears in the Academy city of Myath and meets Leerin Marfes. Leerin invites Nina back to her place and notices a giant glowing orb full of red birds. Nina was able to see it as well and immediately went after it. Leerin then travels towards a crowd where information of an incoming attack with Contaminoids was being spread. Leerin is then taken away by Savalis to a safer area, however, along the way, she chooses to go towards the giant orb and frees the birds and the city’s Electronic Fairy along with the help of Loi. After saving the electronic fairy, Loi is shown to have ill intentions. As Nina was going after the glowing orb, she encounters the wolf men who wish for her to join them knowing that she possesses Gandoweria’s Fallen One. Meanwhile, in Zuellni, Layfon is sent to battle constant Larvae-stage contaminoids as the city encounters more along its path. He is then talked into resting by Karyan. Karyan then reveals to the public that the city is encountering contaminoids and gives a speech on how they must stand and defend it. Earlier before, Felli was shown to have collapsed from over-usage of her psychokinetic powers and was resting like Layfon. During Karyan’s speech, Layfon was looking out through the roof of the building he was resting in and meets Felli as he was about to return. Felli states that she will “do anything as long as he wishes it” (which reveal her feelings for him as well). Layfon declines the offer of her using her powers to locate and count how many contaminoids are in the vicinity. 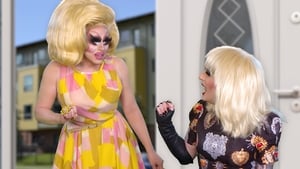